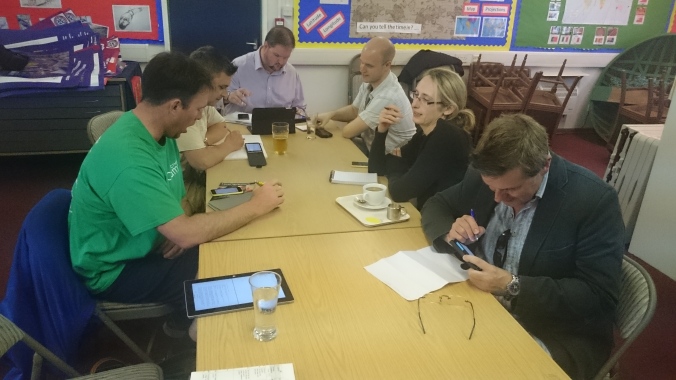 Just one of the many vital questions from around the writing table last night.  The Boat Club comprises seven writers – from TV, theatre, radio and a novelist – brought together to co-write a 6×30 TV sitcom.

It’s a lesson in democracy: each pitching and voting for the overall concept and then the treatment of it.  My idea didn’t make the concept but my storyline was taken as the treatment and so mid-Wales based cop drama Cadi & Lleucu was born.  There are deranged Reverends, meat-stuffed children’s toys and a mysterious case of Welsh Ebola.

Of course there are disagreements and heated discussions along the way but that’s where we learn the most: of others and ourselves.  Working collaboratively has forced the best out of us and is a fantastic learning experience.  Right now we’re in the cycle of polishing and refining, passing the draft round the group.  Dialogue is added, taken away, adapted, returned and adapted again but it’s a diamond emerging from the rough.  Writing is so often carried out alone, fretting in the spare room that your day’s scribbling isn’t good enough.  So it’s good to work collaboratively and share the pain.

There’s a script read-though in July, with actors from the recent touring Tom The Musical.  So come along for the entertainment and networking: venue and date TBC.

And the fish?  Well we plumped for the orange (ginger) fish being Welsh.  Natch.

One thought on ““How can you tell a Welsh fish from an English fish?””